Pick your battles, weight the risks

People are terrible (in general) at picking the right battles. It will help you in your career and life if you learn and decide where your battles are.

For the record - I write it in August 2020. Why is it important? This blog post is based on observation of the COVID-19 outbreak around us at the moment. It is not limited to the COVID situation.

UPDATE: I put this entry aside. I publish it in October 2020, when this entire discussion and situation is even more relevant (again).

People are terrible at picking up battles.

I'm most likely bad at it too. Over time, I got better at questioning myself: "Do I want to fight this battle?"

What triggered this thought was observing people around me, picking wrong battles, or rebelling against some simple daily life rules. What was common in those cases:

Runners or bikers crossing the road on the red light:

I run. I often meet and observe other people who run or bike next to the same trail. I live in the city and run in the city. Cities do have streets. When we have lanes, and running/biking paths, what is inevitable are crossings.

What I observed a lot (at least in my bubble, which is in Poland, Warsaw) is when a runner or biker approaches the crossing at the very moment. The lights turn red for his/her path. They will not stop. Instead, they do tend to speed up and cross it on the red.

Photo by Janis Rozenfelds on Unsplash

I get it. It is about the result, speed, competition. On the other side, there is potential injury and accident. Even if it is not that fatal, another consequence is making life for others (drivers) a little bit harder. In general, it MAKES a LOT OF sense for everyone to stop when lights turn RED!

Is it worth it?

I get it. You are not sure if these measures are needed. There is a lot of discussions on how to approach this entire situation. There is uncertainty. In the end, those are simple things, with little impact on you.

Depends on your location it is different, but here it is:

That's it. Can it harm you? IN 99.9999% not. I'm aware that there are people with specific conditions who need to avoid it. It is like the earlier case as:

(1) it has little impact on your life in its entirety,
(2) it has a significant effect on you or others if something will
(3) go wrong (you might get infected and infect others, etc.), and
(4) doing it, in general, makes sense for the entire population.

In both (and many other) cases:

It is in daily life, and it is based on my experience in my location. I'm sure you can find your cases for similar behaviors in your everyday life.

The same happens in our professional lives. I observe it a lot when working with people. We pick the wrong battles and work on things with little impact. It is easy to rebel against those things, and for whatever reason, we choose to believe, it is a battle worth fighting.

Often it has little impact, and it might be right for a broader environment.

We waste energy on it. We pick too many small, not important battles to fight every day instead of focus on something which has an impact.

Avoiding all risks will get you nowhere. You need to take some risk to do something in your life. Each one of us has a different risk profile, which determines how we take on risks.

Think about this "red light" example I gave at the beginning. Little to gain, a lot to lose in an unlikely but possible event of an accident.

Look at risks when thinking about your battles. 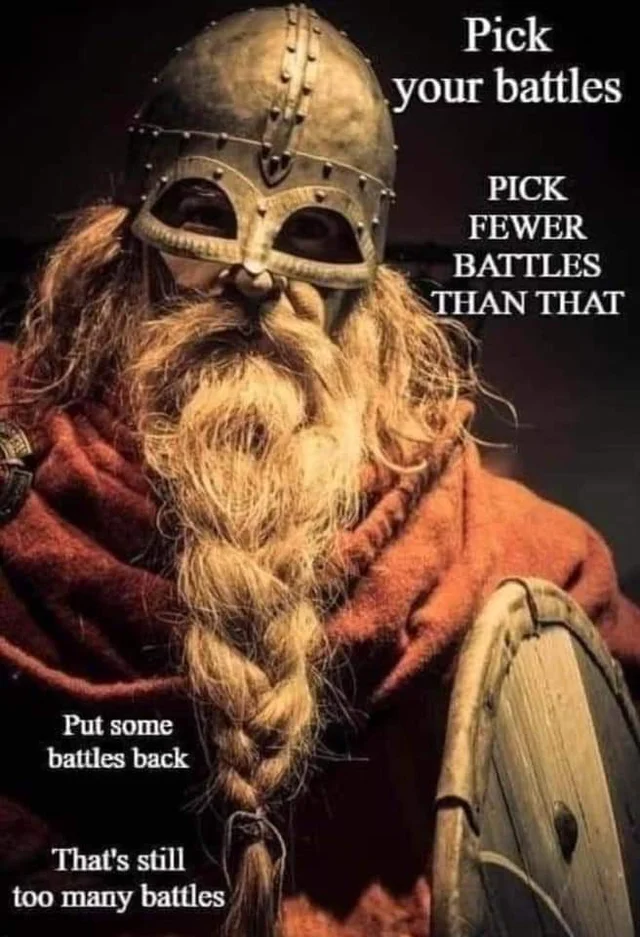 Pick your battles
Pick fewer battles than that.
Put some battles back.
That's still too many battles.
Pick the battles that matter!

Original thoughts on technology career, building business and brand, trends and strategy from me delivered right to your Inbox!

Get original posts, thoughts and tips from me to your Inbox. No spam. Unsubscribe anytime.

All rights reserved • Published with Ghost

Success! Thanks for subscribing to Tomasz Onyszko.

Success! Next, complete membership for full access to Tomasz Onyszko.

Success! Your membership now is active.